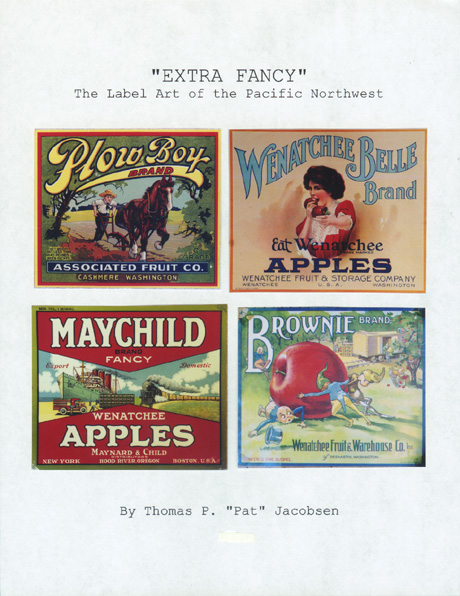 Twenty-two years of research and writing! 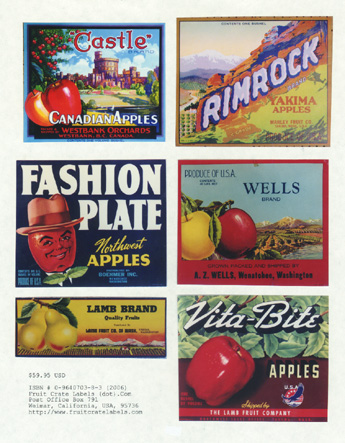 After more than 25 years of research and preparation, it's finally here: "Extra Fancy -- The Label Art of the Pacific Northwest." This new volume for history enthusiasts and label collectors contains over 540 pages of information, more than 1,500 label images, maps of agricultural regions, letterheads, articles, classic postcard and advertising images, and 100,000 words of text.

Chapter One covers the true agricultural history of the Northwest region including Washington, Oregon, British Columbia, Idaho and other local regions, with the text accompanied by label images through the past 125 years, illustrating the story.

Chapter Two goes into depth about the history of just Washington State and its roots in the apple business.

Chapter Three covers more than 20 agricultural regions of Washington, with labels from even the most rare and remote areas, and gives full biographies and date charts for Skookum, Wenoka and Nuchief.

Other chapters cover surrounding regions, the agricultural and packing process from tree to consumer, and illustrated biographies of nearly 50 of the most important and influential fruit shipping concerns in Washington history.

This is by far the most comprehensive volume ever produced on these subjects, and the cost is the same as one moderatly rare label, just $59.95 and $4. shipping and handling.

It has also been designed to work in harmony with the Yakima Museum's recent color book described below. The reason is, producing this book in full color would have cost over $100,000. and each volume would have to sell for perhaps $150. or more. Of the 1,500 images in my book, many are featured in color in the museum's companion volume. Thus, by utilizing my book and theirs, readers can have the fully intended original story AND most of the color pictures. In this way, by owning BOTH books, the cost is about $130 for both books, which gives the reader more than 3,000 images and 115,000 words of text, and nearly 850 pages of informative reading. This is a bargain, considering one fairly rare Washington apple label can cost between $130. and $150. So buy BOTH books today!! 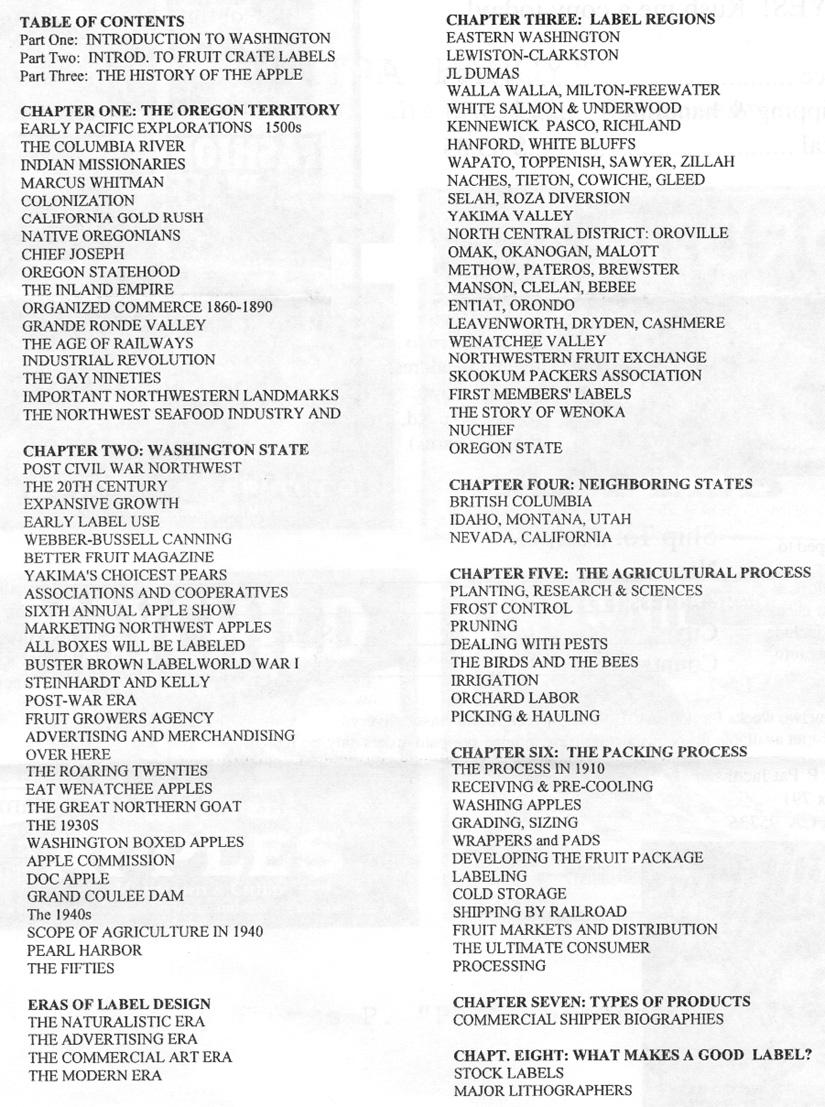 ABOUT THE ORIGINAL PROJECT

Since the late 1970s, I have been acquainted with the Yakima Valley Historical Museum in Yakima, Washington. Many years ago, George Moore was the curator of the labels donated to the museum by local farmers and packers. His passion was to build a collection for the museum, which for years, he did diligently. The museum built an enviable collection (by any standards) and, ammassed a mountain of about a million labels to sell, trade, or use to benefit the museum. One day, George, a career apple grower, passed away, leaving a noticable void in the hallways of the museum and in the hobby. Then, a few years later, along came Delmar Bice, the current curator of the label collection, who is an immeasurably important patron of the label-arts, and researcher extraordinaire of the history of Washington State agriculture and apple growing. Over the years, during my association with Del, we have traded thousands of labels, shared research, attended swap-meets in the Northwest, and often discussed the idea of a serious book about Washington apple and other labels. Then a woman named Cora Marcus contacted the museum with an interest in a book with the proposed title "Extra Fancy," that she could help them get published. Another meeting between Del and John Baule and myself was held, where hatched the outline for the book we all were to create. Theirs would be called "Extra Fancy."

The book we decided upon would be a wealth of chronological agricultural history about the state of Washington and its realtionship to apples and fruit growing, as told through the images on the labels themselves. It would chronicle the real history of agricultural growth in the greater territory (which includes the present states of Washington, Oregon, Idaho (Montana) and British Columbia.) And, although it would be a lot of reading, it would be full of early documentation and labels of every kind. It would draw upon the museum's many fine collections, and upon mine, and I would author most of the content. It would be "more than a book full of pretty pictures."

So, late in 2003, the museum approached me with news of an arrangement with an important Eastern publisher of color art-books, and asked me to actually write the book's historical content and chose the artwork to support it. So, between November '03 and March of '04, I spent hundreds of hours compiling over100,000 words of text they requested, and more than 1,000 photographic illustrations and scans, taken from myriad old referrence books and documents collected over 27 years of travels, and prepared a manuscript in 660 pages. It focused on not just the Yakima Valley, but the entire Northwestern region (B.C. to Oregon to Montana), from the 1810s to the present day, and how the apple developed from the first seeds into a goliath industry spanning a 130 years of development. Being a book a far greater size than any of us had anticpated, the question became how to edit it to a digestible color book for collectors and anyone else who love these colorful labels from the Pacific Coast. Once the rough manuscript was delivered to the museum, folks there began the editing process, to bring the manuscript into line with the museum's own NEW vision and the publisher's strict guidelines. The plan was to "deliver the book to the publisher in late July, and hopefully see the finished color book available for sale by Christmas 2004."

As it turned out, however, the delivery schedule was delayed for many reasons, and the book had to be re-scheduled for release in 2005. By the time the final editing was done, the original manuscript of 100,000 words had been reduced to only around 13,000 words ( a reduction of 87%). The greatest reason being, (I am told that) publishers of color art books today, do not feel people want to read, but would rather just look at pretty pictures. This is because COLOR is expensive to produce in books, and taking up valuable page space with text is seen as a bad thing, when it is pretty pictures they are selling in book form. Nonetheless, it is a beautiful book and a credit to its creators. To learn more about this exciting coffee-table book, you may contact the Yakima Valley Historical Museum, 2105 Tieton Drive, Yakima, WA, 98908, (509) 248.0747 http://www.yakimavalleymuseum.org 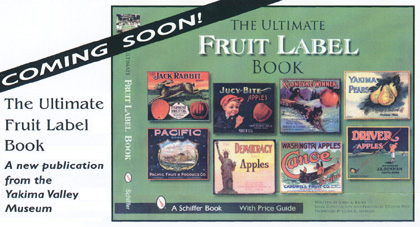 Two and a half years in the making, this book was released in February 2006 at the retail price of $70.00 USD. It has 304 pages of label art and light text. Most of the book is simply pictures of 1,680 images or so: 1,350 of which are apple label variations, 268 pear labels, 50 miscellaneous fruits and some lovely historical photographs, maps and related ephemera. It is a handsome, hard bound book, 9" x 11 " and an inch thick with glossy, alphabetized pictures. The title is not particularly accurate, since it is only a book about 1,600 Washington state labels, where over 6,000 such labels are known to exist. It also doesn't discuss any labels of 40 other types, from 25 other American states. So, it is really the ultimate WASHINGTON apple label color-picture book, and not anything further. The images it contains are of labels from the finest, largest collections in the Northwest, about 50% of which new collectors today will likely never have a chance at owning, at any price. The other 50% consists of images that can be purchased from label dealers today (including this website) rather inexpensively. Most available Washington apple and pear labels (about 900 of them) and can be purchased for usually less than $10-15 dollars, a few hundred are in the $5.00 range. After that, over 50% of the "rare" labels are unavailable at any price, already residing in about 20 leading collections and archives. The book incorporates a pricing system, mostly to suggest rarity, since just about any rare labels (over $100.) won't ever see the retail marketplace. This book is a showcase for the Yakima Museum's formidable label collection, and a few other local collections from private collectors. And, many of the subtle variations between labels of the same image, are very helpful to the advanced collector, though the general reader may not understand them. The book also left out labels for tomatoes, asparagus, meolns, vegetables and many, many other fruits and berries from the Northwest. However, it is recommended for every collector's referrence library.

"Extra Fancy --- The Label Art of
the Pacific Northwest"

ABOUT THE NEW COMPANION VOLUME

Once the museum's decision was made to change the original book plan to an 87% less text and history oriented book, to a picture book, an agreement was made that the museum would produce whatever they and their publisher felt in their best interests, and I would write a similarly-titled volume to suppliment or act as a companion volume to. So, it was to be called "Extra Fancy -- the rest of the story." I would base it on the original 660 page manuscript, and if people got both books, they would have the entire story.

Therefore, I have prepared a "companion" volume called "Extra Fancy -- The Label Art of the Pacific Northwest." This book shall be a compliment to the Museum's release, by digging deeper into the history of the Northwest, it's apple industry, and will look more specifically at all the things left out of the other book. The illustrations will dig deeper into the story, too.

Feel free to write me with any questions about these books, or about questions pertaining to Washington State apple labels, or any other question. Thank you! <email Pat> pjacobsen@fruitcratelabels.com

IF YOU HAVE LABELS TO SELL OR HAVE APPRAISED
For information, current values, and a search service for Northwestern labels of ANY kind, you may feel free to contact me and I will be happy to assist in any way I can. Thank you! <email Pat>